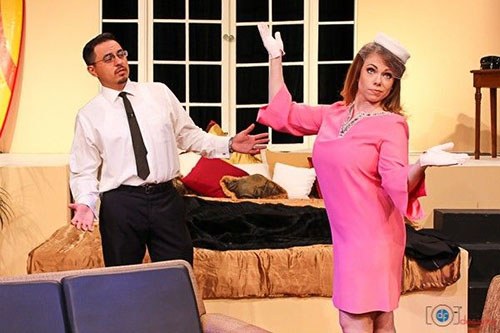 What a way to open a show! Beautiful, sophisticated set, the background music of some of the best of Frank Sinatra in the 50’s …and then you witness the demise of the central figure, Charlie Sorel, in about three seconds! Okay, Charlie was shot by the enraged husband of ONE of Charlie’s paramours, Rusty (Rose Trauschke). As they say, “Thereby hangs a tale” – same song, 2nd, 3rd, 4th, etc. verses. How goodtime Charlie lasted as long as he did is astounding! The ‘tale’ is a trail – shocking and hilarious – of his escapades with every woman in their high society group. The funeral was attended by only a smattering of people (4 to be exact – Janet Elayne, Jeff Lucksinger and Renae Runnels) and his friend and business manager, George (Ralph Garza). George was hard-put to find even a very FEW good things to say about Charlie. He finally gave up in his eulogy and called Charlie an ugly name. Apparently, that’s what just about everybody thought of him.

As he stayed in Charlie’s apartment to try to figure out WHAT he was going to do with Charlie’s affairs, suddenly, he has a visitor, a beautiful blonde, gutsy and busty ‘lady’ (Haley Hernandez) who identifies herself as CHARLIE! Persisting in disbelief, poor George cannot take in that Charlie has ‘returned’ as a woman … who could? Charley looks like a woman in every way but still thinks like a man. Her comments and George’s are spicy and hilarious. For all of Girl Charlie’s bravado, she is scared she’ll never make it as a girl, so she uses George as an “average man” sounding board. She figures her first adventure as a girl should be a day at Elizabeth Arden, and a stunning outfit from Rodeo Drive … stunning is right!

Smashing Job for the Cast and Crew

Her encounters with Rusty (wife of the shooter), Franny (Renae Runnels) and Greta (Janet Elayne) provide even more laughs and a startling revelation from Rusty. Treat yourself to some good entertainment while “Goodbye, Charlie” is in the neighborhood – PASADENA LITTLE THEATER, 4318 Allen Genoa, weekends through June 28. Call for reservations and more information, 713-941-1758. Director Revis Bell and all the cast members do a smashing job! Special Kudos to Haley Hernandez (in her debut) and the return of Ralph Garza. WOW to Rose Trauschke, as well.