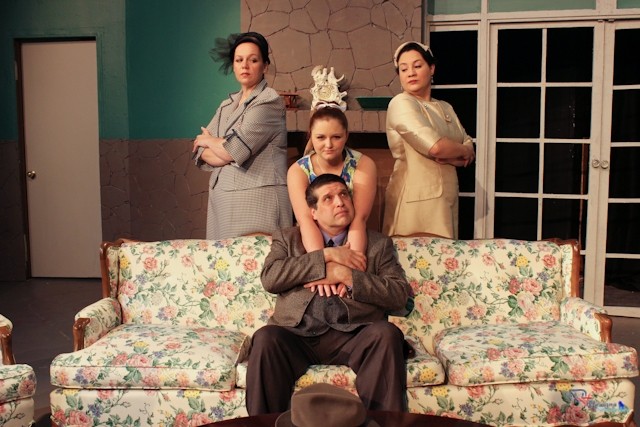 In one of the most attractive and interesting sets I’ve seen in community theater lately, we are introduced to Fernand and Lucienne Ravinel, a sophisticated married couple in rural France.

Playwrights Dorothy and Michael Blankfort gave Director Greg Brown a fascinating group of diverse characters, who move in and out of the plot with, at first glance, little connection.

But wait…next, we meet the teenaged neighbor girl, Lisette (Nikki Vanderhoofven), who has a “too die for” crush on Fernand. He considers her a childish playmate. What significance does the maid, Henriette (Grace Galloway), have, except that Lucienne is overly suspicious of her?

Knowing that Lucienne will never divorce Fernand, the doctor begins to devise a scheme to ‘remove’ the wife, leading the weak husband through every detail of the plan. Neighbor, retired detective, self-described “shepherd of wolves,” Desire’ Merlin (Bruce Blifford) offers to drive Lucienne to the train when she plans to visit her brother in Paris (Darrel Collins as Andre).

The elaborate brain-child of Monique begins to unravel when ‘the body’ disappears from the garden, one of the large bath towels used to wrap ‘the body’ appears, along with Lucienne’s red scarf, and Lucienne’s brother makes a hasty trip out from Paris to describe his sister’s bizarre behavior in the past!

No way will I reveal the shocking conclusion! Find out for yourself when you attend this riveting production at Pasadena Little Theatre, 4318 Allen-Genoa, just south of Fairmont Parkway. This amazing cast of “Monique” will reward you with superb acting in every role, and you’ll be aghast at the outcome.