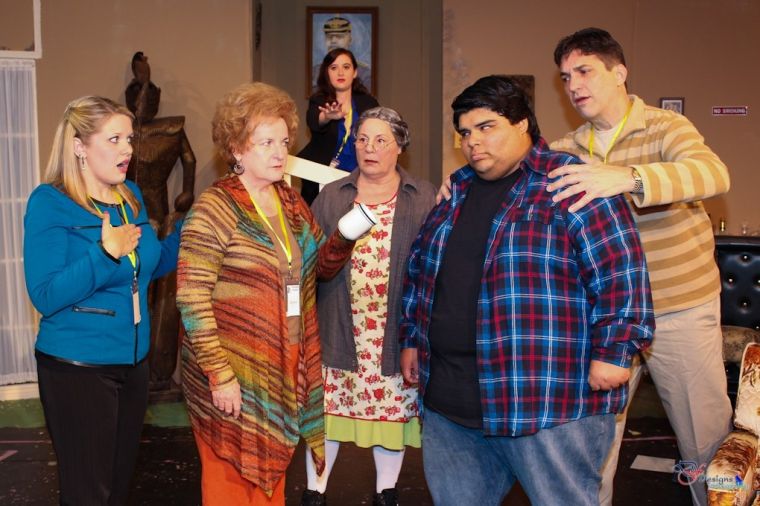 Your travel agent probably booked you into Barnsley Inn, but when the truth is told, the accurate name is Murder Inn, because of the legend of Marco and the flying knives.

The group in the play didn’t actually CHOOSE to stay at Murder Inn, but their tour bus was diverted by floods and mud slides, which closed all roads in the area. These were NOT ‘happy campers’ . . . some more unhappy and vocal than others.

Super socialite, domineering Agnes Tate (Zona Meyer) is the number one griper and about to drive her fellow travelers off the deep end! Meyer does an excellent job in her role, as do each one of the large cast. Running a close second in griping is the innkeeper, Martha Talbot (Jo Ann Levine), who closed the inn for the season, because resident “haunt” Marco doesn’t like ‘company’ at this time and behaves accordingly. Her son, Jake (Dwayne Hernandez) tries his best to keep his mother on an even keel, but she continues to rant about having to open the inn to stranded passengers.

Agnes’s beautiful companion is her niece, Carolyn Pickett (Brandee Hake), whom young Todd Currier (David J. Barron), finds very attractive. Traveling with his well-versed father Professor Lawrence Currier (Revis Bell), Todd is content to concentrate on Carolyn throughout all the strange knife attacks….real and staged. Is it Marco who is responsible for the bloody mayhem OR is it one of the travelers using the scary environment to commit the crimes?

Charming young tour guide Ellen Halsey (Vicki Wood) tries to diffuse the outbursts of fear and bad temper, but when gunshots are added to knives, control is impossible! Hysterical Muriel Lampmann (Katie Reed) is sure her Ouija board has all the answers. Unstable, introvert Patricia Simpson (Sharon Goodwin) has a crush on the professor, along with Muriel and Agnes. Bus driver Donald (Bill Edwards) is worn out from the driving hazards, as well as unloading the massive amounts of luggage.

Two cool heads prevail – longtime friends, Grace Sharp (Barbara Winburn) and Doris Brooks (Regina Kirkland). Between their caustic jabs at one another, the two are determined to sort out the chaos and solve the mystery of TWO murders in their midst! These two ladies were stars in their roles.

Director Julie Owen has done an outstanding job of “herding cats” in bringing together a very large cast and maximizing their volume of talents. Playwrights Voland and McGregor should be ecstatic over her finished product.

Each character played his unique part to perfection. You will be confused on several occasions, but impressed with the performances of such a multi-talented group. Key words: LAUGH and GASP!

Hurry to make reservations for the remaining days of “Murder Inn”, by calling PLT at 713-941-1758 or use www.pasadenalittletheatre.org. The play runs Fridays, Saturdays at 8 p.m. and Sunday at 3 p.m. through November 3. Two tickets for one low price will come on Halloween, Thursday, October 31